How Manufacturers Are Joining The Fight Against COVID-19

Home business strategyHow Manufacturers Are Joining The Fight Against COVID-19

How Manufacturers Are Joining The Fight Against COVID-19 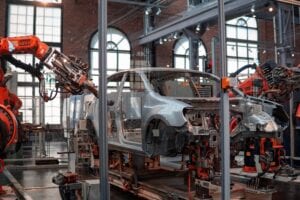 Photo by Lenny Kuhne on Unsplash

The manufacturing sector has a proud history of helping countries in their time of need. From repurposing their factories during wartime to donating supplies and products to humanitarian efforts across the world.

Through the  COVID-19 pandemic, the world is currently experiencing one of the greatest upheavals to everyday life experienced outside of war.

People are working from home, many businesses have shut their doors, children can’t go to school. Streets are empty and each country is waiting for their leaders to reassure them.

As the world struggles to deal with the COVID-19 pandemic, manufacturing is once again stepping up to help in a crisis.

Compassion is making a difference

Though it certainly feels like a bleak time, there are glimmers of hope to restore our faith in humanity. One of the few positives to emerge from the current crisis is the empathy and support shown by many big corporations.  Companies such as Microsoft and Apple have both pledged to keep paying their hourly workers, even if they are unable to work.  They have also increased and improved their family and sick leave entitlements. Many more companies will be going above and beyond for their employees too.

Manufacturers are now having to pivot their entire operation to help make lifesaving equipment and supplies. From car companies to Grooved Roller Bearing manufacturers, they are all doing their part.

In response to a growing demand for ventilators, a consortium of UK businesses, including the car manufacturer McLaren, came together to design and produce ventilators in a super quick time frame.  They have now received the go-ahead to supply 10,000 ventilators to the British government.

Better known for their vacuum cleaners, these companies have each designed and produced completely new models of ventilators called.

Cleverly, they both designed their ventilators around existing product parts, meaning that valuable time was saved in production. Dyson has provided 10,000 units to the NHS and a further 5,000 to international causes.

Gtech has produced 30,000 ventilators and has made its design for the ventilator completely free for other people to use.

Many major players in the automotive industry have begun pivoting their manufacturing facilities to make medical supplies.

Ford is producing over 100,000 protective face shields every week and is using its 3D printers to produce parts for medical equipment.

The company has also joined forces with General Electric to produce a simplified ventilator model that can be mass-produced at speed.

Despite the fact that the US government is claiming that it compelled both Ford and General Electric by invoking the Defense Act, both companies were in fact already gearing up for production.

These are just three examples of the lifesaving contribution being made by the sector.  There are tens of thousands of manufacturing companies, across the world, making a difference by making PPE and ventilators and donating their time and resources. Even breweries are using their ethanol to create hand sanitizer.