Here’s Why All Your Employees Need To Sign Employment Contracts

Here’s Why All Your Employees Need To Sign Employment Contracts 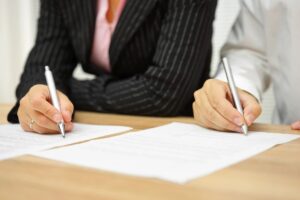 A contract of employment is a legally binding document that shows someone works for your company. Not only that, it shows that they have agreed to work for your company under a series of conditions. When starting a business for the first time, it’s very difficult to understand all the different elements of business law. It’s a confusing world, so you may forget certain things – like creating these contracts.

In some cases, you might not need these contracts. Perhaps you are employing friends or family to help you out, in which case it might seem a bit formal of you to draw these contracts up. Technically, there’s nothing legally wrong without giving your employees a contract of employment. So, why should you? Well, it can be very beneficial for both parties…

A key element of a contract of employment is that it details an individual’s roles and responsibilities. This outlines exactly what that person is expected to do for your company. So, having a contract will basically mean that this person has agreed to do all of those things. They’re aware of the job, so they aren’t agreeing to a role that they will then complain about in the future.

Avoid any issues down the line

When you don’t have a written contract of employment, it can make everything a bit hazy and confusing. For instance, an employee won’t know what their rights are regarding sick days or time off work. They also won’t know what their rights are if they want to leave their job. If they come to you complaining about their job and what they’re doing, it’s hard for you to defend yourself without the written contract. There may have been verbal agreements, but is there a record of them? Unless you filmed the moment where you both agreed to things, it’s going to be a case of your word against theirs. So, if they take legal action, the ball could be in their court. With a signed contract, there’s hard evidence of everything you laid out, and all that the employee agreed to.

Allows you to take legal action

Speaking of legal action, there might be times when you want to take it against your employees. For whatever reason, an employee is going against their contract and it’s costing your business. You’ll find litigations lawyers are often dealing with contract disputes like this, normally revolving around employees that feel they are owed money. If you’re being pestered by a current or former employee, taking them to court can get them off your back. With a contract that details all the terms and conditions of their role, it’s so easy to argue your case. You can win, put the trouble behind you, and get on with your day without paying any compensation.

While you don’t technically need to have written employment contracts, it will be extremely beneficial for both you and your employees. Make sure you work with a lawyer that specializes in business or employment law to help you draw up your contracts.